Go Long: Why long-form Stories are important for Publishers

The Internet was supposed to diminish the importance of long-form content for publishers.

As  the number of creators expanded and attention spans shortened it was assumed by many that "snackable" pieces would come to dominate online channels.

And, to be sure, audiences have embraced short, quick content — from snaps to tweets to disappearing stories. However, this rise has not been accompanied by the predicted fall of long-form.

In fact, long content pieces have paradoxically become more important than ever for publishers. Why? For these four key reasons: 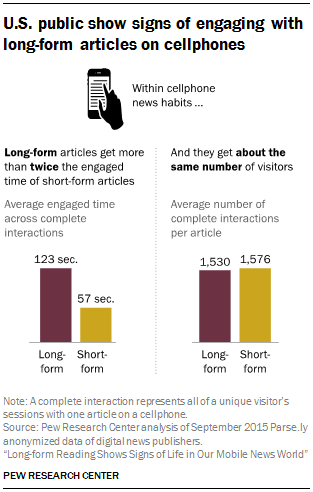 Moreover, this difference in engaged time with short- and long-form content holds steady across time-of-day and the channel taken to get to the news story.

One one hand it isn't surprising that people spend more time with longer content, since it requires more effort to consume.

However, what's unexpected is that the study focused on mobile and still found a huge gap in engagement between long- and short-form pieces.

In other words, modern smartphone and tablet users, who are often thought of as absent-minded scrollers, are in reality open to engaging for significant periods of time with lengthy content.

According to an analysis conducted by SerpIQ (in 2012, and not available published anymore), the top two organic results in Google search tend to be be significantly longer (~2400 words) than results in the three through eight positions.

A separate analysis by SEMRush resulted in similar findings: content pages which rank in the top three spots in Google search are 45% longer, on average, compared with pages in the twentieth position.

As for social media, a Hubspot study found that the lengthiest content pieces (more than 2,500 words) get the most shares across networks, on average. 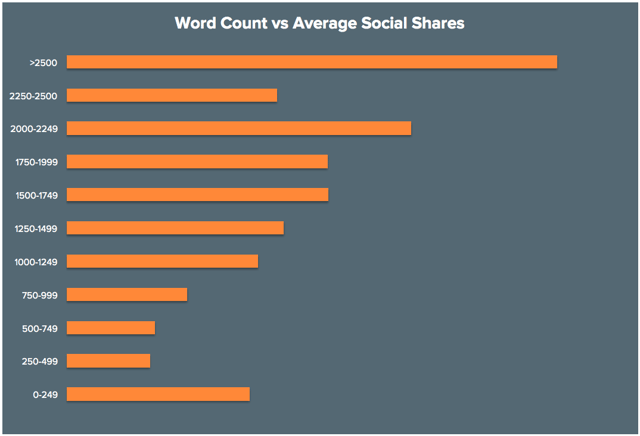 In part, this success on search and social can be attributed what long-form content covers. In general, these pieces — which are both time- and resource-intensive to create — tend not to focus on current, short-lived topics. Rather they tend to be more evergreen in nature. This enables them to build consistent interest on external channels over time.

Beyond which topics they cover, long-form pieces often do well on search and social because of how they approach topics.

As this analysis by Neil Patel shows, long-form pieces that succeed tend do so because they are:

Put another away: The power of a long-form pieces on external channels doesn't lie in the length itself, but rather in the fact that the length gives skilled publishers enough space to cover topics in-depth and comprehensively, which indicates to search engines and users that this is a carefully researched and authoritative story on the topic. The Analytics reports of publishers who regularly publish long-reads does not lie, just as The Guardian, NewYorker, New York Times, Foreign Policy etc.

In many ways, the success of long-form content on search and social merely reflects what audiences find important. And what's clear is that people very much prize smart pieces that cover topics authoritatively and expertly.

In a time of changing business models, this value placed on long-form content by audiences is especially important. As publishers move away from relying purely on advertising and shift towards subscriptions/paywalls, the benefits of deep, original, and engaging pieces increases.

As Nick Thompson, the editor-in-chief of WIRED and former online editor of The New Yorker put it to Recode:

"When you create a subscription business model, your incentives change significantly. You’re trying to build a really deep relationship with your reader. No one is going to subscribe if they think that what you’re doing is not unique ... You do want as many readers as possible. You do want people to come frequently. But what you really want them to do is love your stories."

In other words, to motivate readers to enter paywalls and/or subscribe, it is essential for publishers to create content that people love. And long-form pieces are one of the clearest examples of the stories that audiences truly love.

In a time of pinched budgets it's amazing how many publishers continue to invest in in-depth reporting projects.

On Longreads, which has more than 1.4 million views a month according to Similarweb, there are countless examples of elaborate long-form pieces from publishers both big and small, and from countries around the world.

Some of the most prominent recent examples of this commitment to rich journalism include The Guardian's Long Reads Series — which encompasses everything from an detailed essay on the real Goldfinger to a 25-minute audio discussion about euthanasia — and The New York Times' multimedia features, such as its in-depth piece documenting people fleeing Boko Haram.

Why do these publishers remain so committed to such resource-intensive projects?

In part because they lend credibility and help organizations differentiate themselves.

In a time when audiences are constantly bombarded by content, there may be nothing more powerful to help publishers stand out than long-form pieces. In many ways they are the ultimate differentiator: this content attracts attention and highlights competence in a way that nothing else can.

What's important to note is that today's pieces don't necessarily look the same as the in-depth reporting projects of the past. They are often presented with interactivity built-in and make use of a range of different media types. Ultimately, this shows that long-form is more vital than ever for publishers — it boosts engagement, succeeds on external channels, helps with subscriptions, and differentiates organizations — in part because the form itself is continuing to evolve.

How Publishers Are Building Membership Communities to go with Subscriptions

STAY UP TO DATE

The artificial intelligence engine can identify and track more than 1 million distinct audience interests, revealing actionable insights about the content your audience wants the most.